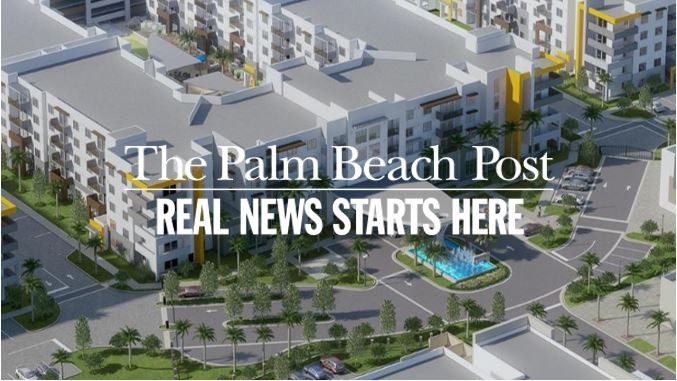 As the year ends and 2020 approaches, five sites in south Palm Beach County are set to be transformed into apartments, condos, shops and offices. Some will start construction next year and others will finish, but all will create new centers of living and activity for the county’s growing population. Probably the most prominent site is on the western edge of downtown Delray Beach, on a seven-acre parcel along Atlantic and Swinton avenues. The site features The Sundy House boutique hotel, gardens and restaurant, and several historic homes. Formerly known as Midtown Delray the site now is dubbed Sundy Village, where 50,000 square feet of retail and restaurant space, and 70,000 square feet of office space are planned. The Sundy House will remain, but new development will be built around it. Boca Raton-based Pebb Capital bought the site for $40 million in October, following brief litigation with the project’s prior developer, Hudson Holdings.

Pebb Capital’s Todd Rosenberg said he’s eager to move forward with the project in the next year. “We think it’s a great opportunity in a great city, and we’re super-excited about being able to bring an incredible development to the gateway of Atlantic Avenue,” he said. But expect some changes to the project’s look, particularly when it comes to paint color and roofing. For instance, Rosenberg is considering using copper roofs. Also, Rosenberg is thinking of adding balcony railings. This is in keeping with the historic Cathcart House on the site. The Cathcart House was built in 1903 in the French Colonial Revival style. The goal is to keep the project’s look in line with the Anglo-Caribbean style of the buildings, instead of the Mediterranean-esque style promoted by the prior owner. Farther east in Delray Beach is Atlantic Crossing, where Atlantic Avenue meets the Intracoastal Waterway.

Atlantic Crossing is a $300 million complex spanning two blocks and featuring office and retail space, plus for-sale condominiums as well as rental apartments. The project is being developed by The Edwards Companies. The property, bounded by Federal Highway to the west and the city’s Veterans Park to the east, has been in the works for years, at times hamstrung by legal battles between the developer and the city. But the project finally is under construction, with the first phase set for completion by 2021 and the second phase set for 2023. Don DeVere, The Edward Companies vice president, said Delray Beach has several unique features that make it a good bet for the future. “It has a nice balance of residents, office workers and vacationers,” DeVere said. Retirees moving to Florida may find interest in Atlantic Crossing’s planned condominiums, DeVere said, or they may prefer the flexibility of renting one of the project’s apartments, as DeVere expects many young professionals in their 20s and 30s will be inclined to do. In addition to the office and retail space, DeVere also is upbeat about plans to build new office space in the center. Atlantic Crossing will feature 20,000-square-foot floor plates to accommodate large office users. Merrill Lynch, for instance, already plans to lease a full floor in the project’s first building.

Outside the downtown, a major redevelopment is set to start in 2020 at Office Depot’s former world headquarters in Delray Beach. The land and buildings at the Congress Avenue property, just west of Interstate 95 and south of Linton Boulevard, changed hands earlier this year for $33 million. New owners plan to break ground in 2020 on a 43-acre complex featuring rental and for-sale multifamily homes, plus shops and restaurants. It’ a massive project that provides a rare opportunity to create a new community in a city poised for continued growth, said Inigo Ardid, co-president of Key International. Ardid said the project is an opportunity to provide housing “at a good price” close to employment centers. Ardid expects to see a range of residents moving to the project. They include working people with families who will be able to enjoy of a large planned park in the complex, he said. Key International bought the Office Depot campus together with CDS International, 13th Floor Investments and Wexford Capital. The property, on Congress Avenue just south of Linton Boulevard, is slated for 424 rental apartments, 112 rental townhomes and about 123 for-sale townhomes.

Farther south, two projects in Boca Raton are expected to attract the attention of residents, shoppers and office workers. One is Uptown Boca. The former farmland west of Boca Raton is being transformed into a $200 million complex featuring shops and apartments to create a city center in sprawling suburbia. Uptown Boca Raton will feature a shopping center, movie theater, grocer and 456 rental apartments. The property is at Glades Road and 95th Avenue South. The complex is under construction now and is set to be ready in 2020. Developer Brian Schmier said Uptown Boca’s goal is to create a varied experience for residents of the apartment complex, as well as visitors to the center. When the project is completed, patrons will visit the Silverspot Cinema, a small luxury theater chain. They will shop at Lucky’s Market, a national grocery chain founded by two Colorado chefs. They will also dine at Lynora’s, the popular West Palm Beach restaurant that is opening its first south Palm Beach County location at the site. Other restaurants coming to Uptown Boca include Bolay, BurgerFi, Lazy Dog Restaurant and Olive U Mediterranean Grill. While numerous apartments are being built in downtown cities such as Delray Beach and West Palm Beach, suburbia will see fewer new complexes. In fact, Uptown Boca is the first project featuring Class A apartments west of Boca Raton in the past 20 years, said Schmier, of Schmier Property Group. He is developing the project with Giles Capital Group and Rosemurgy Properties, in partnership with Wheelock Street Capital. “We think this place is the hole in the doughnut, an opportunity to come into a mature market and bring something totally new and fresh,” Schmier said.

Another property to keep an eye on is the Boca Raton Innovation Center. That’s the former IBM campus in Boca Raton, just west of Interstate 95 between Yamato Road and Spanish River Boulevard. The sprawling complex where the personal computer was born is set to be the centerpiece of a new landmark: An office complex geared to the future Boca Raton employee. Plans are afoot to transform the 1.7 million-square-foot office building, the largest in the state, into a center of science, technology, art and community gatherings. “We want it to be what it used to be: A renaissance for the city,” said Angelo Bianco, managing partner of Crocker Partners, which bought the complex for $170 million in 2018. Long term, the 130-acre former IBM site on Yamato Road just west of Interstate 95 could feature homes on what are now parking lots, and maybe even a hotel.

In the near term, if all plans are approved by the city, look for the Boca Raton Innovation Center to hold a number of new amenities. One bold idea is to build a performance center in the middle of the lake that is at the center of the giant office complex. Another cultural touch is a plan to fill the office building’s long corridors with art that can be viewed by the public. In addition, a museum of technology is in the works, as is a lab where tenants will be able to work on prototype ideas outside of their companies, alongside artists, coders and sculptors. This blending of science and art is dubbed STEAM, which stands for science, technology, engineering, the arts and mathematics. A presentation hall for conferences, plus a food hall and various restaurants, also are planned.