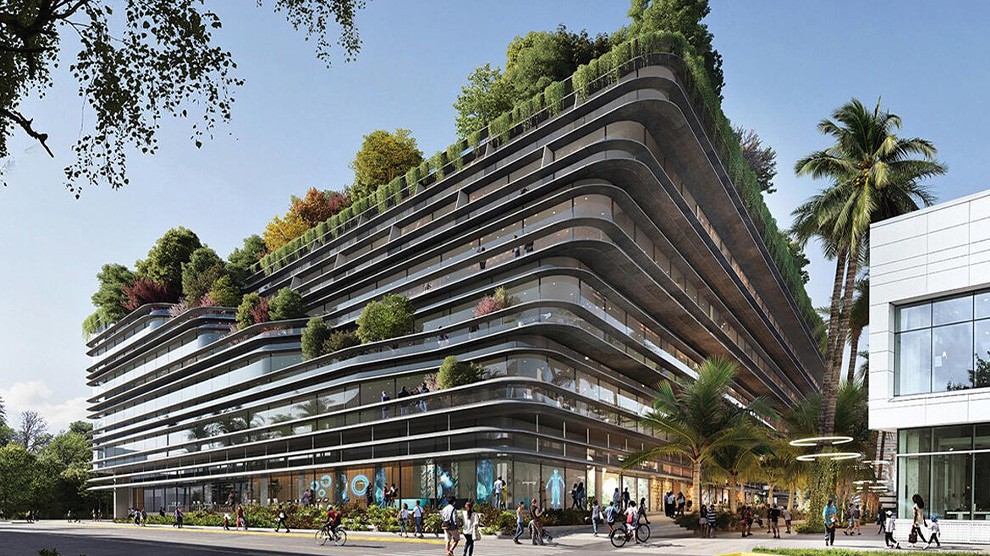 In Manhattan’s Murray Hill, he struck a deal to buy the Community Church of New York’s home. And in Bay Harbor Islands, a small town north of Miami Beach, he closed on the purchase of two vacant lots.

Both developments will be strictly within the height and unit counts allowed on the sites. Yet this only makes one of the ventures a straight shot. The other? Not exactly.

“In the case of Bay Harbor, I complied but I still have to present the building” to town officials, said Eichner, founder of New York-based Continuum Company. “They still have to say, ‘I like the facade.’ It gets comments. [This] does not exist in New York.”

New York and South Florida’s real estate markets have long been lures for high-risk, high-reward developers. They are intertwined: Many of New York’s titans have expanded to South Florida, especially in recent years, with an increasing number of dual-market buyers and frustration with the Big Apple’s regulatory policies. The pandemic, of course, served as a supercharger for the South Florida boom. In some cases, the region’s developers have also been inspired to take their talents to New York.

Taking on projects in both South Florida and New York means working through vastly different project approval processes in each market.

The Real Deal asked four developers with experience in both places to spill the tea on specific market quirks. Is South Florida really a refuge compared to New York when it comes to availability of affordably priced land? Is New York truly the place where developers have to go to make it big? And what are the only-in-Miami and only-in-New York peculiarities?

Some of the distinctions are apparent. Yes, New York is costlier than South Florida, but the windfall usually is bigger, developers said.

New York’s much higher costs come despite the lack of a requirement to pay impact fees. South Florida mandates that developers pay the fees, which are for the expansion of roads, water and sewer connections, schools and other infrastructure needed to support the new development. Both require payment to pull building permits.

Other differences, you’ll only find out, well, if you build in both markets, like Eichner is doing.

Opting to develop the Murray Hill site in line with the existing zoning allows him to quickly embark on building the condos. Same goes for the rest of New York City, where the development code has been hammered out  down to each lot, with few opting for the massive undertaking of a rezoning, he said.

“If you have a matter-of-right project, you can pull permits as quickly as you can file the plans,” Eichner said.

South Florida, in contrast, has three counties and 104 municipalities, each still striving to preserve or carve out its character. Don’t build over 75 feet in Bay Harbor. Or over 120 feet on beachfront lots in Surfside. These towns don’t want to look anything like one of their neighbors to the north, Sunny Isles Beach. And in Miami’s Wynwood Arts District, make sure building designs are architecturally distinctive.

Call the region vain, if you will, but a developer usually can’t proceed without layers of advisory boards and elected officials weighing in.

Eichner bought the Bay Harbor lots because they have existing project approvals. Still, not only did he have to show the town his designs, he also had to tweak plans to remove an underground garage. The Federal Emergency Management Agency bans subterranean parking on some residential-only properties, he said. To pull permits, Eichner worked with the town, where some Building Department staff members work part-time.

“The concept that it’s easier to do business in South Florida is ridiculous,” Eichner said.

Hint: Just look at how densely developed the city is, and think about what it would take to build when your neighbor’s building is immediately next to your project site.

“To try to narrow it on the differences between New York and doing business in South Florida, I can’t say one way or the other one is easier than the other,” Benson said. “There’s definitely challenges in both markets.”

Reviews, votes? NY has no time for that

Overall, South Florida’s extensive project reviews are an opportunity for collaboration with officials that lead to thought-out designs, developers said.

But when a project undergoes several advisory boards with multiple members — each of whom has different ideas— and then another round in front of commissioners, each of whom has varying visions and requirements,  it could politicize the process.

Don Peebles, who hopes to build offices with some apartments on public land in Miami Beach, knows this well.

“I never hired a lobbyist until I came down to Miami Beach,” said Peebles, who redeveloped the Royal Palm Hotel, renovated the historic Bath Club and developed next-door condos on the barrier island. “I think because it’s a small municipality, small amounts of opposition can slow a project down or derail it.”

In July, commissioners greenlit the 99-year land lease and development agreement after months of renegotiations with city staff members and then multiple commission hearings.

Between the planners, architects and attorneys needed to handle the back-and-forths, the project’s soft costs easily went up 15 percent, Peebles said.

And it’s not over. On Nov. 8, Miami Beach residents will get the final say in a referendum.

“Imagine if New York City, in order to get a tower built, has to go through a public referendum,” Peebles said. “It would be vote after vote.”

Now, compare Peebles’ Miami Beach odyssey to his bid to build the 2 million-square-foot “Affirmation Tower” on state-owned land on Manhattan’s West Side. The 1,663-foot-tall building, envisioned as hotels and offices, would be the tallest by floor height in the Western Hemisphere.

The decision lies with one authority: Gov. Kathy Hochul.

The state late last year rescinded the request for proposals for the site. But Peebles expects the solicitation will be reissued in the coming months.

If that happens, if the state doesn’t significantly change what it wants on the site and if Peebles succeeds, it would take a negotiation with state staff members and then a contract signing.

“The developer doesn’t even appear and it’s over,” Peebles said. “New York doesn’t have time to be inefficient.”

For the much smaller, 0.2-acre Murray Hill church site at 40 East 35th Street, his acquisition is slated to close this summer. (Eichner declined to disclose the price, but TRD reported it last December as a $69.5 million ground lease deal that will later convert to a sale.)

The pair of eight-story Bay Harbor buildings, the first with 68 units and the second with 57, will have condos ranging from 1,500 to 2,400 square feet, he said. The first building sold out at an average of $1,100 a foot.

The 17-story Murray Hill condo will have roughly 180 units, which will be roughly 20 percent smaller than Bay Harbor’s but, he hopes, will fetch at least $2,000 a foot, he said.

Overall, the Bay Harbor acquisition cost is 60 percent of the Murray Hill one, and the construction costs would be about 25 percent less, Eichner said. After all, concrete is just more expensive in New York.

“The concrete cost in New York is 35 percent higher than New Jersey across the river,” Eichner said. “Go figure. That’s what it is.”

Still, it’s nearly impossible to draw a true comparison between projects in the two markets. Although the Murray Hill condo has a sellout 80 percent higher than the Bay Harbor one, it actually won’t come to market until about two years from now, Eichner said. There are just too many moving parts in each project.

Even the general view of South Florida being a sanctuary for New York developers because it has more available buildable sites at more attainable costs is being tested. The past two years have seen a rush to buy up developable land that pushed prices to new highs.

“All of a sudden it’s not so user-friendly,” Eichner said. “It’s not so easy to find a piece of land that makes sense.”

Only in Fort Lauderdale

When Pebb Capital embarked on the 14-story, 80-unit Monarch Heights student housing building near Columbia University, it had to sit down with the next-door building owner.

In New York, where buildings often abut one another, licensing agreements that ensure construction won’t impact those next door are often required.

“If you go into a New York deal and don’t think about your neighbor and how you are going to handle that, that could hold you up,” said Benson, principal at Pebb Capital.

The agreements between the developer and adjoining property owner detail items such as the scaffolding.

Asi Cymbal, a developer who made a full transition to South Florida from New York 17 years ago, said construction costs are lower when builders don’t have to worry about neighboring buildings.

“The type of protective measures you need when you are literally abutting another structure is different than when you are not,” said Cymbal, who heads Miami-based Cymbal DLT.

As for South Florida, much of it low-lying, construction of underground garages often has been limited because the water table rises high.

Cymbal looked into building a 200-space below-ground garage for his two-tower Riverwalk Raintree Residences project in downtown Fort Lauderdale. But at three times the cost of putting those spaces in an above-ground garage, he opted against it.

Construction will start early next year on the 28-story Riverwalk Raintree tower, followed by commencement of work on the 29-story tower. The project will have 677 apartments, combined, at 413 Southwest Third Avenue.

But it couldn’t start until Cymbal took care of another aspect of the project, one that he says he never ran into in New York: the relocation and preservation of a tree.

The century-old rain tree has been at the root of a decade-long debate, with some in the community arguing it could never be replaced if it dies when moved. Cymbal has pledged $1 million if the tree dies within five years.

With consultation from an arboricultural consultant and an arborist, the 100-foot-tall, 130-foot-wide tree is slated for relocation this month.

During his time in New York, Cymbal experienced all sorts of hiccups with projects, such as the time he worked alongside Shaya Boymelgreen on a development that employed nonunion workers.

“Every day I walked to the site and there would be dozens of union guys protesting the fact that that developer brought in nonunion labor,” he said.

But he never ran into having to relocate a rain tree. That, Cymbal said, “is unique to South Florida.”